If you bought patterns prior to December 15, 2021, Register for an account and then fill out this Form to link up your patterns to your new account.

I love finding a craft that is fun for both myself and my kids to do! It's a definite bonus when it is quick, inexpensive, beautiful. A few weeks ago, I was on the lookout for something simple (but pretty) to do with a group of mom friends at church, and I found this idea for making sun catchers out of really easy-to-find materials. I thought they looked like they would be worth a try, and it turned out to be a lot of fun! 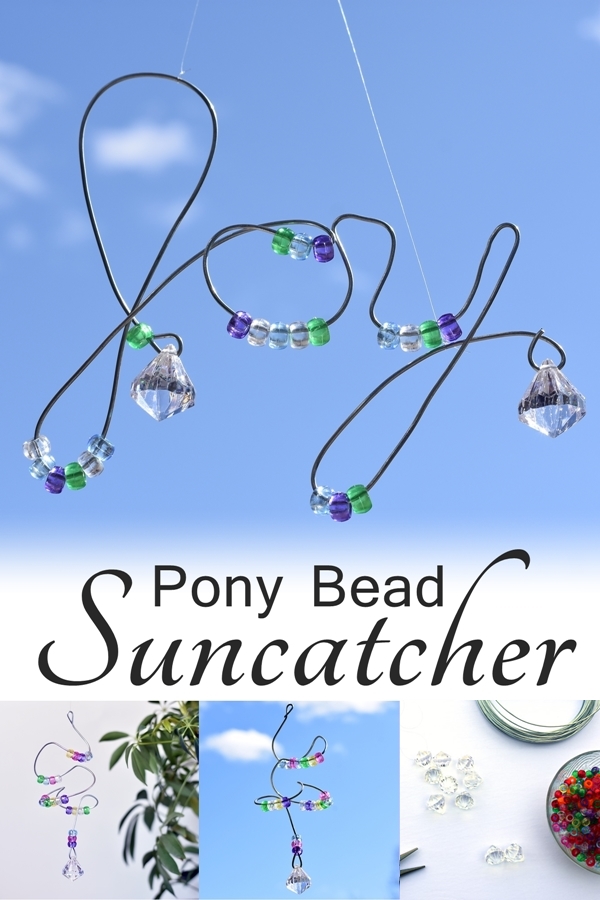 The supplies for this craft could hardly be simpler, and for less than $5.00 you can make several sun catchers!

I got the idea from the blog, Happy Hooligans... she calls them Bead and Bauble Sun Catcher Ornaments. She had the brilliant idea of upcycling glass crystals from an old chandelier, and at first I thought "I'm never going to find those!", so I was super excited when I found plastic "drop" beads that look really similar.

I actually found most of what I needed at the dollar store. The wire was in the gardening section (I imagine you could find something similar in the hardware section too), and the pretty faceted drop beads were near the floral stuff (they were by the decorative stones that you would put in vases). I wanted beads that the sun could shine through but there wasn't anything that I liked at that particular dollar store, so we zipped into Walmart and, as luck would have it, they had translucent pony beads that I thought might do the job! At first I was disappointed that I didn't find any beads with flat edges because I thought they would catch the sun better... but I'm actually really glad I got the pony beads. They have big enough holes that they can slide right over doubled-up wire, and they were easy to move around tight bends and loops. 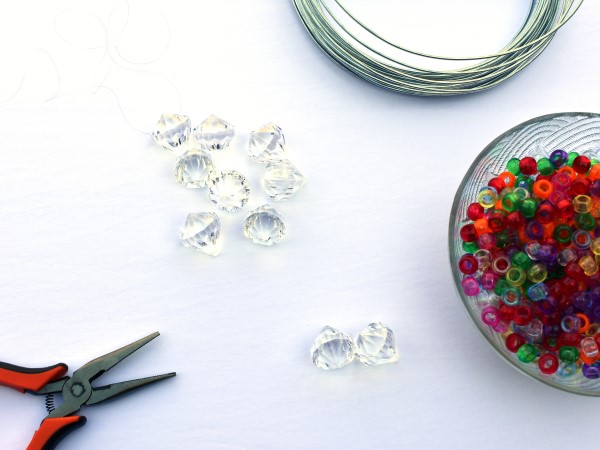 What I love about these sun catchers is how EASY they are... and yet they are really quite beautiful. They take just a few minutes to make, and you will probably find that you want to make several of them and experiment with different combinations of colors!

The first thing you need to do is cut a length of wire about 12-18 inches (30-45cm) long. With needle nose pliers, bend the end into a loop that is wide enough for one of the drop beads to sit in nicely (if the loop is too tight, the bead won't "dangle", so play around with this until it seems right). You don't have to twist the end of the wire to secure it... the beads will take care of that for you! Feed a few pony beads onto the wire, and slide them over the end of the looped wire to hide it. It took me three beads to completely cover the wire end that was coming up from the loop I had made.

Now, just start bending and twisting the wire. You can simply coil it in a spiral, or you can let yourself go a little wild and make dips and turns as randomly as you want to! Just remember, if you want beads to stay in a certain place, they need a low spot to sit in. If you coil the wire, all the beads will slide down to the end. This looks nice too... but wasn't what I was going for. I wanted a bit of chaos, so I twisted and looped in several places. Then it was just a matter of placing beads on and moving them into position. 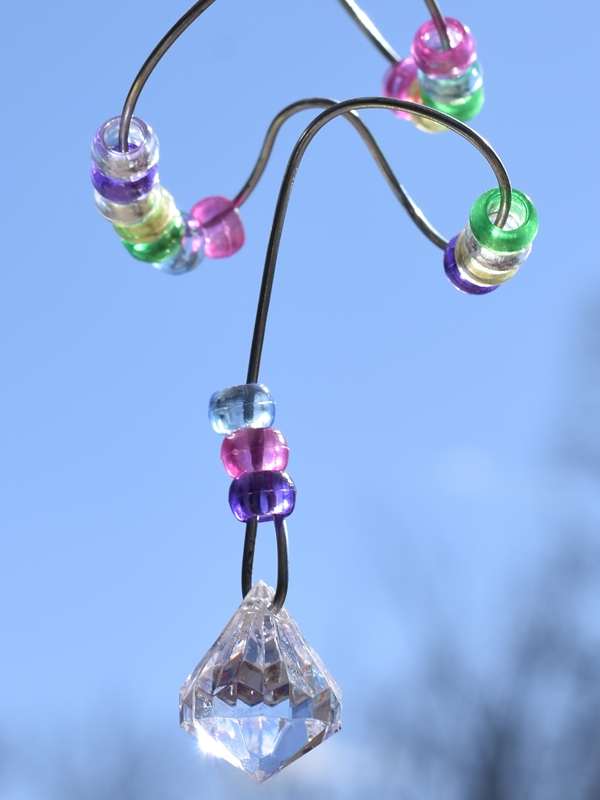 You can play around with patterns of color, or just put the beads in random order. One option that I didn't have a chance to photograph before gifting it to a friend was a "fire" inspired one that used a repeating pattern of yellow, orange, and red beads. My daughter made hers with all pink, purple, and white. You'll see below an example with purple, blue, white, and green in no particular order. The design options are limitless, just have FUN with it!

And remember too... if you don't like how it looks right away... just twist and bend it some more. Every time you bend the wire, you change the possibilities.

Speaking of possibilities... you might want to try a specific shape, like stars or hearts! Or how about trying a word? When that particular inspiration struck me. I just HAD to give it a try... now, hanging from my kitchen window, is a lovely reminder to consider each day with "Joy". 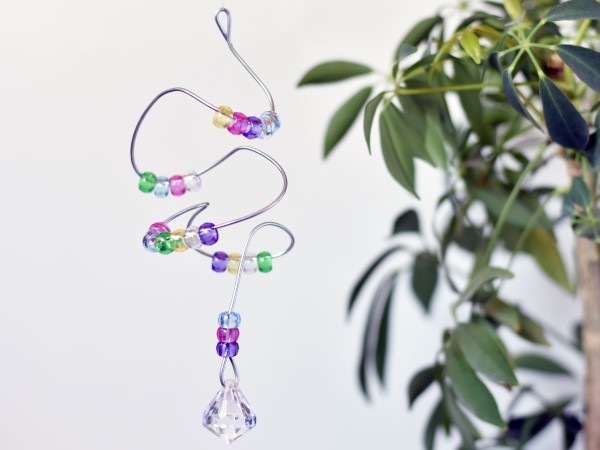 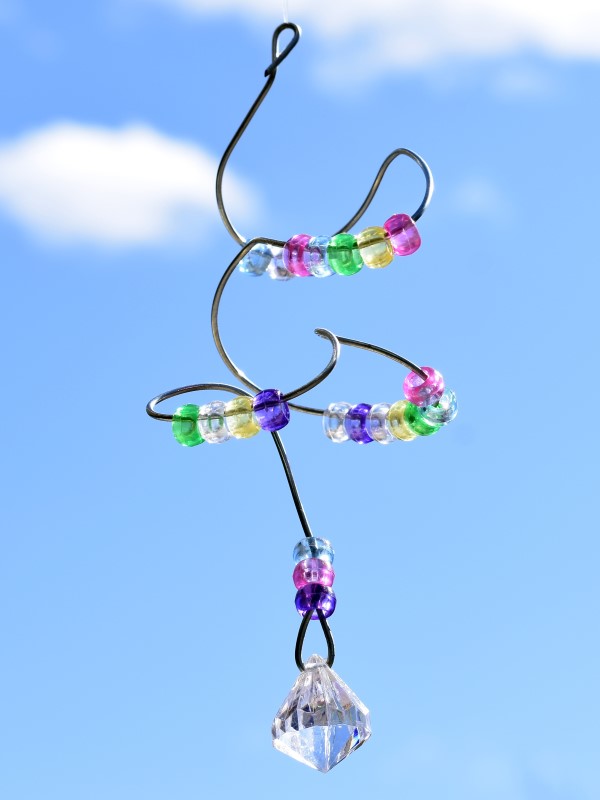 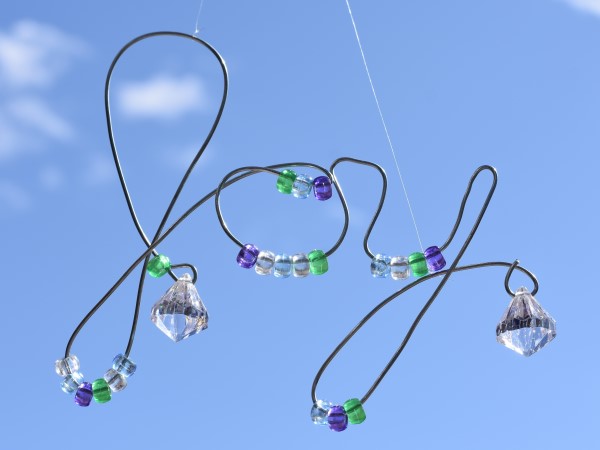 When your sun catcher looks perfect, add a little loop to the top and tie a piece of fishing line or twine so you can hang it.

Oh! And if you are wondering how kid-friendly these sun catchers are... well, my kids saw me playing with the pretty beads and of course they wanted in on it! My 5 and 7 year olds did need a little help, but my 8 year old did his totally on his own and I think this would be a great project for a group of older youngsters!